Josh about to pass his grandpa

Here, at age three, Josh regularly runs a mile or two with me--and I have to work hard to keep up!

OK, he isn't exactly my running buddy.  But he is a very good friend, and boy could he once run.  And boy, has this guy given me some incredible insights about the role of sports in our society.
It's not often that you'll find a long-distance runner hanging out with an NFL linebacker and having stuff to talk about.  There's kind of a culture gap.  We distance runners are slow-twitch and skinny; those guys are fast-twitch and explosive.  We are usually light-to-medium weight; they are anywhere from big to gigantic.  We spend a lot of time alone on wilderness trails; they spend a lot of time in ear-splitting stadiums.  Ever since high school cross-country, half a century ago, I thought football players were a different breed altogether--until I met David Meggyesy.
It happened after David married my cousin Carolyn, who had graduated with honors from Yale, and right away I thought that must be a very odd couple!  I was a bit apprehensive about meeting him, but they lived in the San Francisco Bay area and I was going up there to visit my friend Ken Lee and run a 50k, so we all arranged to get together.  When we did, it wasn't just polite handshakes; we hit it off right away.  And on the morning of the race, even though I had to get up ultra-early and drive to Marin County while it was still dark, there at the start was David, to give me an enthusiastic cheer.  Later, my wife Sharon and I went to David and Carolyn's house in Berkeley, and met some of their friends.  One of them, to my great surprise, was a guy named Don Paul, who had been one of the top American ultrarunners of all time: he had once run 50 miles in a mind-blowing 5:10.  That's miles, not kilometers!
Before meeting David, I heard he had written a book, Out of Their League, that had raised a huge ruckus in the football world.  I read it, and found it to be a very entertaining but disturbing expose of the apparently rampant corruption, exploitation of young athletes, and spectacle of violence that big-time college and pro football had become.  David had played at Syracuse (I think he was a freshman the year they won the national championship), and later played linebacker for the St. Louis Cardinals of the NFL, where he reputedly became notorious for his leg-breaking tackles.  And then, at the peak of his career, he had quit and published his book, which became a huge best-seller.  Since then, he has devoted his life to studying the role of sports in society, and that's where he and I discovered that our interests coincided.
Contrary to what a reader or reviewer of his book might have thought, David Meggyesy is not a disgruntled ex-player.  In fact, for many years until his recent retirement, he was one of the leaders of the NFL Players Association.  But he has also been pursuing some questions that go far beyond pensions and medical plans (and, lately, what to do about head-butt concussions and brain-damage).  What is wrong with an American population that is sports-crazy but grossly overweight and unfit?  Why is it that while an enthusiastic minority of the population runs 10ks or marathons or works out at the gym, a much larger share is looking more and more like Rush Limbaugh?  And most important, when you think about that ancient mantra of "mind, body, and spirit," which is so easily and often invoked, how exactly are those parts of our nature connected?  Is it even possible to badly neglect one of them and not be dangerously eroding the others?  (Does your brain get the oxygen it needs for optimal cognitive functioning if you don't exercise your body?  Can your spirit grow if your mind and body are dormant?)
A few days ago, I launched my new website, willhumansendure.com. I sent an invitation to friends, and one of the quickest to respond (he was always one of the quickest to get to the ball carrier) was David.  He sent me a piece he'd written, and among other insights it contained a comment that goes to the heart of what I want to explore.  The gist of it is that as everyone knows, if an athlete wants to be good he has to practice, but what an awful lot of people don't seem to recognize is that it also takes practice to become mentally or spiritually fit.  The mind and soul need exercise just as much as the legs and lungs do.  Yet, millions of us are content to stop reading books, or studying complex issues, or asking hard questions and searching for answers, after about the age of 21.  I know people who have been sitting on the couch eating fritos for decades.  And, too many of them vote for politicians who themselves have never read a book or done serious soul-searching--who are not only physically soft but have done nothing to keep their minds fit.  And these are the people who are going to make our policies and laws?  Just the thought of it makes me want to go out for a run.
Posted by Ed Ayres at 4:50 PM 2 comments:

This is my FIRST WEEK here, so please be patient while I figure this out!   As a long-time ultrarunner, I have come to think patience is one of humankind's greatest potential strengths, but it is terribly neglected in this era of ever-greater speed and rushing in all things.

For the moment, let me just say I have been a competitive long-distance runner for 54 consecutive years and counting, and I love it as much now as I did in my first year of high-school cross-country back in 1956.

I have also come to believe that for early humans, thousands of years ago, long-distance running (as nomadic hunters) played a key role in our evolution and in the development of our unique capacities to endure, envision, and plan.  I explore these themes in more depth on my website, willhumansendure.com.  Here, I will just share some of the day-to-day insights I've had about the ways in which I now think that running profoundly affects our abilities to contribute to our communities as active, healthy, and responsible individuals. 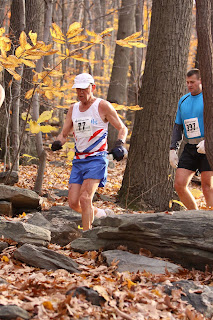 Ed Ayres
I've been running competitively for 54 consecutive years, and love it as much now as I did when I joined my high school cross-country team in 1956. Competitive highlights: Finishing 3rd in the first New York Marathon, in 1970; 3rd in the U.S. 50-Mile championship in 1976 (in 5:46); 1st in the JFK 50-Mile in 1977; 1st in four U.S. national age-division championships at 50K road, 50K trail, and 50 miles. I was the founding editor of Running Times magazine, now published by Runner's World parent Rodale Press. In recent years, my interests have expanded to exploring a theory that mental, emotional, and spiritual fitness require serious exercise as much as physical fitness does. It's a growing problem for the world, and especially for America! It's not just obesity that has become epidemic, but mental and spiritual passivity! I explore this idea in my website www.willhumansendure.com.